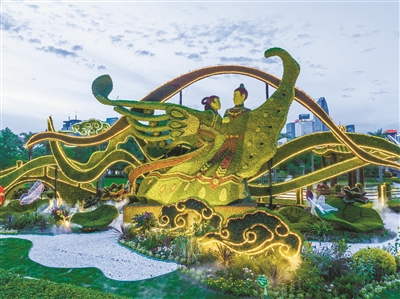 ¡¡¡¡A sculpture of Niulang and Zhinü formed by plants in Sanjiangkou. [Photo by Xin Zhicheng]

¡¡¡¡Qixi Festival, or Chinese Valentine's Day, falls on the seventh day of the seventh month of the lunar calendar. This year, it is on August 4^th. According to Chinese mythology, the immortal heavenly weaver Zhinü is allowed to meet her mortal husband once a year on this day. Couples in Ningbo enjoy this Festival in both modern and traditional ways.

¡¡¡¡According to legend, once, there was an orphan cowherd, Niulang, who lived with his abusive elder brother and sister-in-law. They eventually kicked him out of the house and gave him nothing but an old cow.

¡¡¡¡The cow, however, was a former immortal sent to earth in bovine form as punishment for violating the heavenly court's rules. One day, the cow led Niulang to a lake where fairies often took baths. There, Niulang saw Zhinü, the most beautiful fairy and a skilled weaver.

¡¡¡¡The two fell in love at first sight and were soon married. They had a son and daughter and their happy life was regarded as the ideal by everyone around them.

¡¡¡¡Yet in the eyes of the Jade Emperor, the Supreme Deity in Taoism, marriage between a mortal and immortal was strictly forbidden. He ordered his minions to bring Zhinü back to the realm of fairies.

¡¡¡¡Niulang was devastated when he discovered Zhinü had been taken away. Moved by Niulang's sadness, the cow sacrificed its own life so that Niulang could use its hide to make a pair of magical shoes, which gave him the power to fly. Niulang put his two children in two baskets strung from a shoulder pole and chased after the minions who captured Zhinü.

¡¡¡¡The pursuit enraged the heavenly empress, who took her hairpin and slashed it across the sky to create the Milky Way, separating husband from wife.

¡¡¡¡But all was not lost, as a flock of magpies, touched by Niulang and Zhinü's love and devotion, formed a bridge across the Milky Way to help the family reunite. Even the Jade Emperor was touched. He allowed Niulang and Zhinü to meet once a year on the seventh night of the seventh month.

¡¡¡¡Traditionally, after dusk on Qixi, people would turn their gaze to the night sky, searching for Altair and Vega. These two stars, situated on opposite sides of the Milky Way, are named "Niulang" and "Zhinü" by the Chinese.

¡¡¡¡In the past, Qixi was not only a special day for lovers, but also a time for girls to pray for nimble fingers in needlework and making handicrafts. In some parts of China, girls would throw a sewing needle into a bowl full of water on the night of Qixi. If the needle floats on the surface instead of sinking to the bottom, then it is proof that the girl is a skilled embroiderer.

¡¡¡¡The love story of Niulang and Zhinü has been handed down for generations, yet certain traditions associated with the Festival are at risk of dying out, which is why some Ningbo schools are organizing activities to revive them. Students can try their hand at threading a needle and the needle-floating game. Both activities were popular among noblewomen during the Qing Dynasty.

¡¡¡¡In the days just before Qixi, Ningbo was enveloped by a festive atmosphere. Jewelry stores, restaurants, beauty brands, and other retail businesses launched Qixi-themed sales campaigns.

¡¡¡¡The sales of jewelry, chocolate, and other gift items increased significantly. Pre-orders for flower deliveries and restaurant bookings rose as well.

¡¡¡¡According to Baidu Index, there was a spike in the number of searches for the word "Qixi" this month. Data from Meituan, China's largest on-demand service platform, also showed the same trend.

¡¡¡¡A spokesperson of Heyi Avenue Shopping Center said the sales of many luxury brands during the Qixi Festival soared this year. The mall saw a footfall of almost 50,000 shoppers per day.

¡¡¡¡"The popularity of Qixi Festival has grown significantly in the past three years to surpass Valentine's Day and even Mid-Autumn Festival in terms of malls' revenues and foot traffic. This suggests that Qixi is gradually becoming one of the busiest shopping days of the year," said the Heyi spokesperson.